It all Comes Back to Kansas City

The only funny thing about this story to me is that the Kansas City resident was surprised by this coincidence. This kind of stuff happens all the time. I'm not kidding. The house in questions is a block from the Blandings. 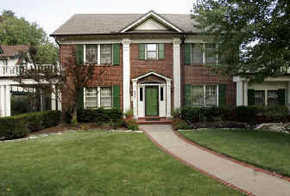 Turns out, this house at 604 W. 67th Terrace in Brookside — along with its green shag carpeting — was a shared connection for two riding the Washington Metro.

Who’s there now?
Chris and Maureen Hinken, who’ve lived at 604 W. 67th Terrace for 15 years, brought up three daughters in the house.

The Post
story seems to especially tickle the youngest Hinken, Maura, a sophomore at St. Teresa’s Academy. She’s growing up in the same bedroom where Joy Bates Boyle and Joel Barr once lived.
“I read it to her and we just laughed and laughed,” Chris Hinken says.
Her reaction?
“She said one thing: ‘Thank goodness the green shag carpeting isn’t there anymore.’ ”
-->
Editor’s note: This story was written by Joy Bates Boyle, a former Kansas City resident, who submitted it to The Washington Post. It appeared Monday in The Post.

It was a Wednesday night. I’d met my husband for dinner downtown, and we boarded the train at Metro Center to head home. As he checked e-mails on his BlackBerry, I checked out the people around us. In front of us sat a young man wearing a baseball cap, a T-shirt, jeans and an iPod. He stood to offer two young women his seat. They declined. Nice guy, I thought. As he sat back down, I noticed “University of Kansas” on his cap.
Perfect, I thought. My family was planning to celebrate part of my mother’s 80th birthday by taking her back to KU, from which she graduated in 1948. I wanted to take her to a good restaurant there, so why not ask this guy in the Kansas cap if he knows of any?
“Excuse me,” I said, tapping his shoulder. He took out his earphone and turned to me. I pointed to his cap. “Do you know any good restaurants in Lawrence?”
“Hmmm, Lawrence,” he said. “I didn’t go to school there. My dad did his residency at KU Med Center, but it’s in Kansas City.”
“Oh, sure,” I said. “I know where it is. I grew up in Kansas City.”
“Me, too,” he said.
“Oh, really!” I said and nudged my husband to make sure he had heard this “small world” discovery. “What part did you grow up in?”
“An area called Brookside,” he said.
“Me, too!” I said. “What street?”
“67th Terrace and Pennsylvania,” he said.
“Wow. I grew up near the same corner!” I exclaimed. I nudged my husband a little harder. He put away his BlackBerry with a smile and nodded yes, what a small world. I imagine now that at least a few people looked up from their books or their BlackBerrys, wondering why a woman was raising her voice on the Metro.
“What was your address?” I asked.
“604 West 67th Terrace,” he replied.
My mouth dropped open. A few seconds of stunned silence.
Loudly, against all protocol on the Washington subway, I cried, “You grew up at 604 West 67th Terrace? I grew up at 604 West 67th Terrace!”
Was this guy for real? I must have looked and sounded like I didn’t believe him, because he proceeded to describe the house to a T.
Yes, it was the same house. His name was Joel Barr, and he knew the family across the street that has lived there since I was a kid. I moved to Washington in 1985. His parents bought the house from mine in 1986.
And then, as if this one-in-a-million chance of meeting was not enough, he said, “My room was upstairs in the back, with the green shag carpeting.”
Loud gasp. I started bouncing with excitement in my seat, off my husband, off the window. “That was my room! Mine was the room with the green shag carpeting! You grew up in my room.” The three of us looked at each other in disbelief.
I called my mom when I got home, and she called our old neighbors from across the street. They couldn’t believe it either, as they looked out their window at the childhood home of two people who ride the Washington subway and just happened to meet one night.
On the Metro, few people speak. Maybe they should.