Remember how we were talking about decoupage? When I was pulling out the Christmas decorations, I was reminded of one of my - on-going - projects.

When my oldest was born in November (1996), I thought it would be great to make frames to put his Santa pictures in each year. So I started with the Twelve Days of Christmas theme and I was off.


A partridge in a pear tree.


Year one was easy. I mean, the frames were always easy. It was Santa that got a little tricky. Year two was OK. Two turtle doves.


Year three was a no go, but he was quite happy in the living room. Three French hens.


Year four. Nope. Actually, there is a picture, but I am in it and I am hugely pregnant and in a red sweater that in some way my shrinking brain thought was attractive. Not to be trotted back out every Christmas. Four calling birds; again, happy in the living room.


I swore I would never do this as there is an identical picture of me at this age and I can remember seeing it and thinking, "What was the point of that?" But he was fine when I put him down and instructed the guy to "just take the picture." But he kept trying to jolly him up with talk of Barney, to whom he had not yet been introduced. So, there's this. Don't miss his brother's expression. It pretty much has not changed since. Five gold rings.

Back to the living room. Six geese a-laying.


A switch to the red office so maybe you won't notice there is no Santa in the picture. Seven swans a-swimming.


This was the lost year of developmental specialists and speech therapists. I do have Christmas pictures, I wasn't completely unhinged, just not of all three. I think. I still have three rolls of mystery film that need to be developed. This is why digital is a good thing for me. (By the way, all is well.) Nine ladies dancing.


So now, with the possibility of Santa success, the oldest generally has basketball games when we have the opportunity to go without mayhem. So, I have the Santa pictures, but not with all three. Ten lords a-leaping.

This might be the boys' equivalent of the red maternity sweater picture. Matching sweaters courtesy of their grandmother. Eleven pipers piping. 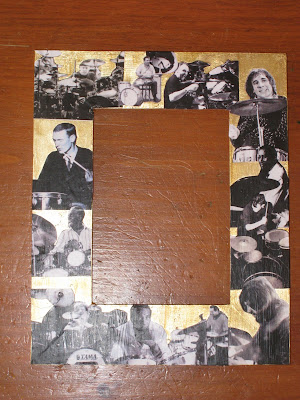 This year makes twelve. Mr. Blandings and I are good friends with a great couple, you know, when both of you like both of them? Anyway, the husband and I are eerily alike in many ways, except mainly gender and politics. And, I know almost nothing about music and he knows a lot. So I e:mailed him to ask him his top twelve drummers. And this is the list. Clockwise from top left, Neil Pert, Buddy Rich, Lars Ulrich, Keith Moon, Connie Kay, Nick Mason, John Bonham, Gene Krupa, Max Roach, Steward Copeland, Art Blakely and Ginger Baker. Now, don't e:mail me telling me you have an issue with the list. When I came up with the concept, I said to Mr. Blandings, "What about contemporary drummers? Like Slash?" Diet Coke almost came out of his nose. Hey, I'm just the idea guy. Twelve drummers drumming.