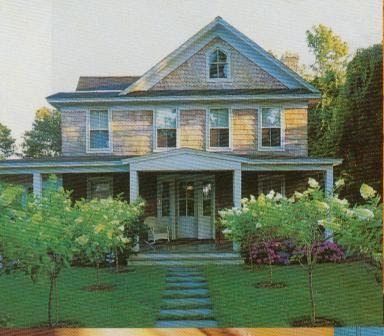 Mr. Blandings and I are a good match for a lot of reasons, but one of the critical ones is he is an amazing cook and I am not. But I do love to eat. For many years when we were first married, and even after the addition of the first baby, I would come home from work, put on comfy clothes and wait for Mr. Blandings to come home and fix dinner. I know this is flying in the face of traditional gender roles, but I was awful and he was great and it seemed a little silly for both of us to eat badly, especially since he liked to cook. 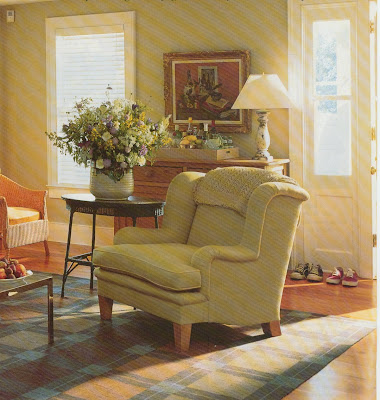 But, eventually, the boys were eating solid food and I quit my job, and it seemed a little silly for us to be sitting at home, a little grouchy and hungry, waiting for Mr. Blandings to arrive. 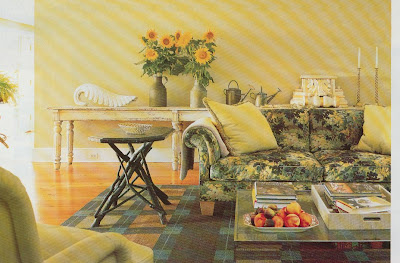 I did try. I simply don't have an affinity for it. No feel. What is the equivalent of a "good eye" in the kitchen? I don't have it. But we muddled through and Mr. Blandings, as is his nature, was always very polite. 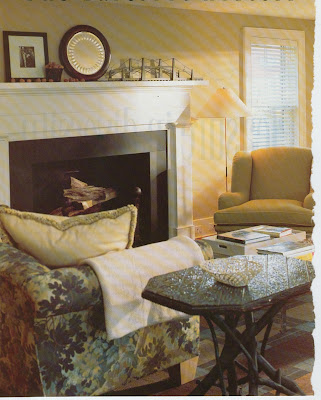 Then one day someone recommended the Barefoot Contessa cookbooks. Shaking my head, assuring her I was beyond professional help, my friend emphatically replied, "It's easy! It's great! You'll totally get her because it's never a list of ingredient as long as your arm and you won't need a dictionary to look up the techniques. Ina is the answer." 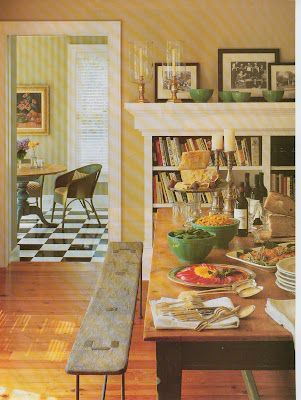 So I bought Ina Garten's Barefoot Contessa Parties. And it changed my life. It's easy! It's great! And I don't need a dictionary or a trip to the Asian market. 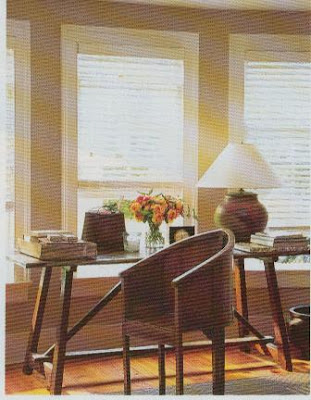 And then, oddly, I became hooked. I have all her cookbooks. And I use them. And I'm...good. Better. Now Mr. Blandings and I sit down together to watch Ina's cooking show on the Food Network. The only problem is, I became a little obsessed with her house. The kitchen hooked me. Green walls, white cabinets, black counter tops. Finally, something to love about cooking. 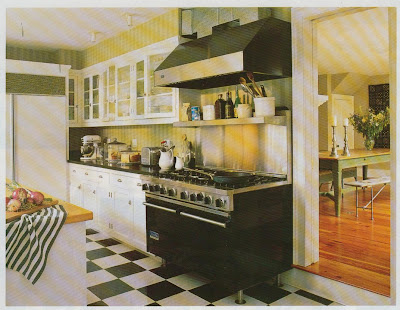 But I'm always craning my head around the corner trying to see into her living room. I looked on line, but I couldn't find anything. Apparently, it hadn't been photographed. Except it had, in 1994, while I was still drinking wine in my KU sweatshirt waiting for Mr. Blandings, Ina's charming Hamptons home was in House Beautiful. 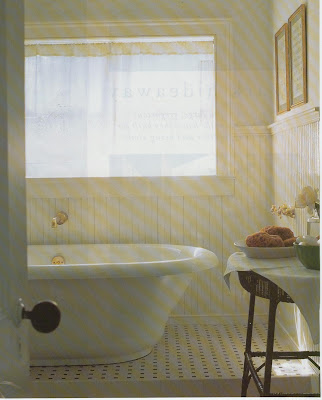 It's changed a bit, but it's remarkably the same. The kitchen island is black granite now and the upholstery in the living room has been updated, but the house is strikingly similar to the images from 14 years ago. 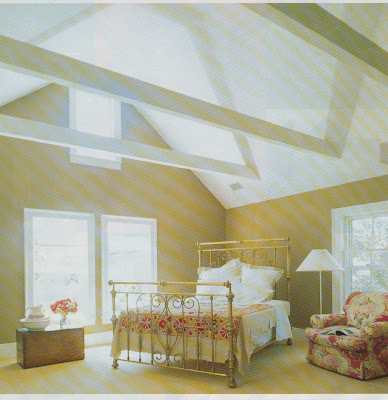 Ina's New York apartment was in House Beautiful this past year. It is also clean and simple. And chic. 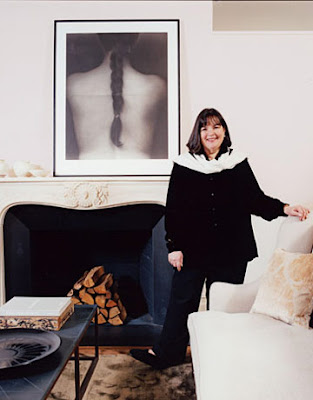 The lines are classic and sculptural, the colors mostly neutral and soothing. 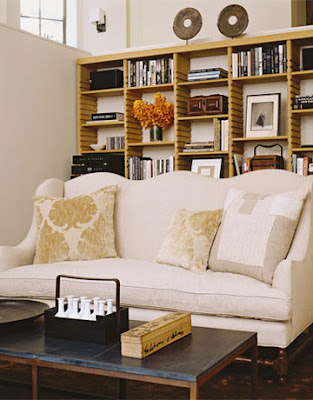 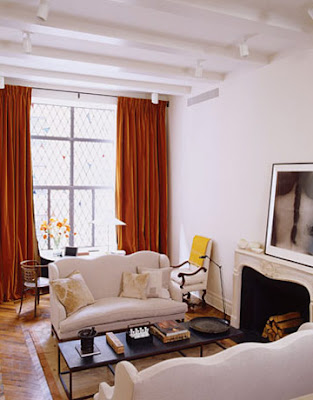 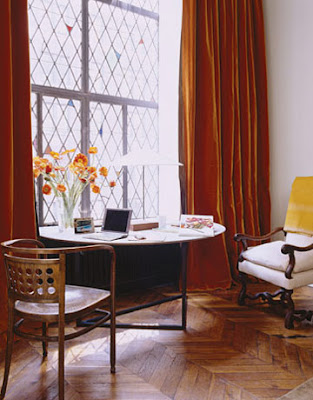 We are now best friends because she allowed this chair to be photographed with the fabric that it is going to be recovered in. But isn't yet. I like a girl like that. 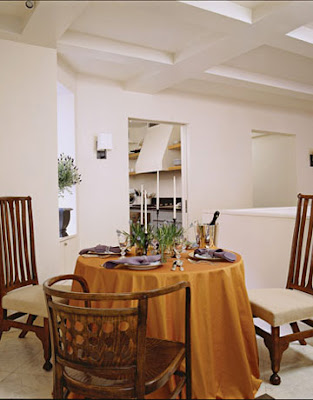 And she has the amazing Ted Muehling candlesticks. 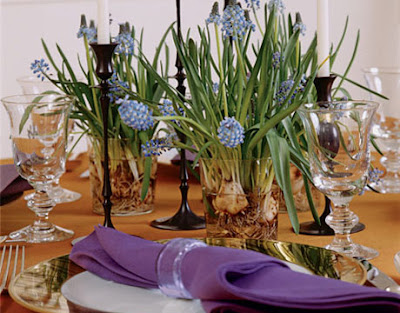 It was so nice of Ina to let us have a peak at the New York pad. The thing is, I hate to be nosy, but I still want to see a new spread on the Hamptons house. Really. 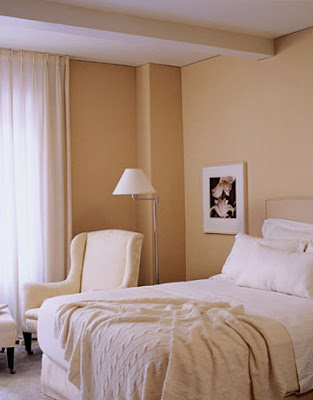 I know I'm a bit like the rubber-neckers trying to peer through the privet. It just seems that House Beautiful would have a bit of an "in." She does write a column for them. 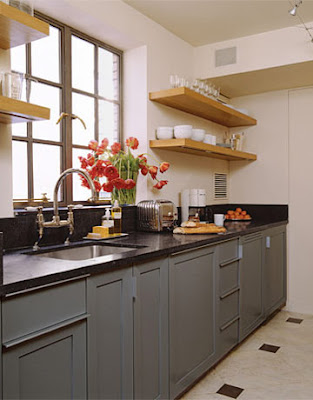 Could she possibly think that we've seen enough on the Food Network? Not nearly. And the magnifying glass doesn't help a bit, even with the DVR on pause. Maybe I just need to stop by for a cup of sugar.