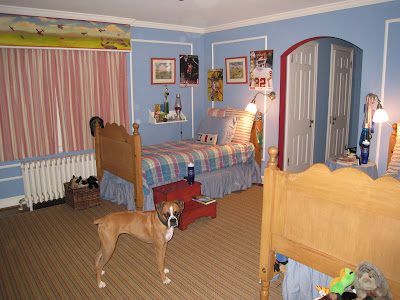 Bewildered Rosie stands on what has revealed itself to be carpet.

I mentioned in a previous post that it's possible that children's rooms are rarely photographed because it's too much trouble to clean them up.  I might have been projecting. 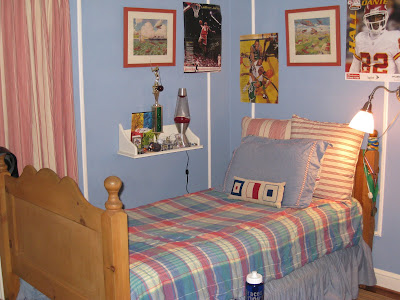 The vintage prints were my idea.  The sports posters were not.

A local company is coming today to shoot an ad in the Dream House.  When the scouts arrived, the downstairs was pristine.  "Did our contact tell you we'd love to see the boys' rooms?"  Um, no.  But that was fine.  Only they were messy.  I mean really messy.  Boy messy beyond anything you can imagine. 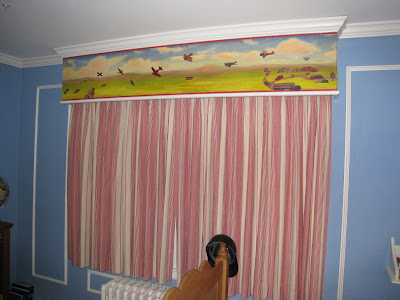 I had the background of the valance painted after I found the prints....

As they were snapping away and I could literally hear my mother spinning in her grave, one of the scouts said, "Oh, it's so real!" 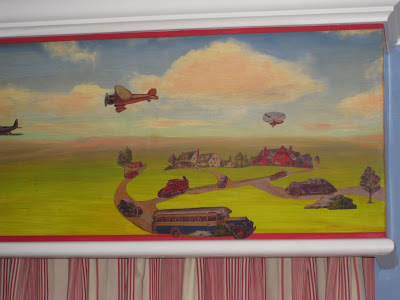 then decoupaged color copies to create a similar scene.  My creativity often flows from my limited budget.

I have a personal "no lie" policy.  I'm crafty with words and can almost always come up with something, like, "It's always great to try something new, isn't it?"  So, I knew what she was doing. 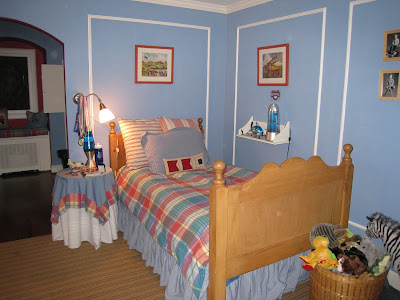 Number 2's side looks slightly better, except all - all - of those animals are usually in his bed.

I spent a good part of the weekend trying to eliminate some of the "realness."  It's never a good idea to go sifting through people's things; you always discover things about them that you would rather not know.  I'm continually conflicted about my children's rooms.  I had a very territorial feeling about mine.  I was confused about why it needed to be tidy if I didn't mind it. 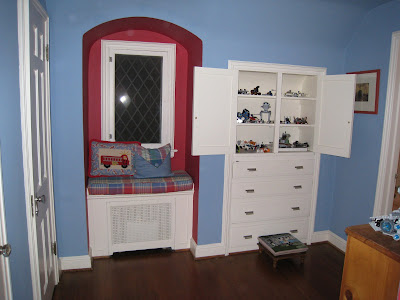 The house is unusual in that the room, with this dressing area attached, is almost as large as the master.  I wonder when they were customizing the floor plan if the owners were thinking "Lego Museum" in the built-in?

But as I was lugging out the three, big, bags of garbage (not rotting carcases, just broken or obsolete toys) I realized that maybe my mother was just trying to dodge Family and Children's Services.
I had to photograph it yesterday.  It might never look like this again.  It's still plenty real.  And if they need any more, all they need to do is open the closet.