Just to be Clear 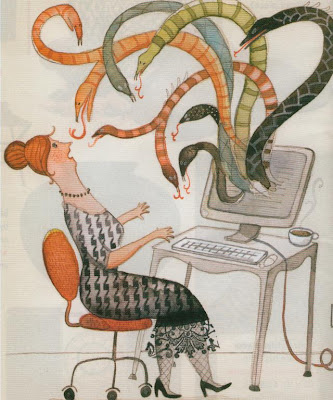 I would just like to take a moment to clarify a little something. I made a point, when I started this little voluntary endeavor, to keep things positive. I know, I've taken a couple of swipes here and there, but, primarily, I don't dish. I thought this would keep everyone within the lines of, "If you don't have something nice to say..." Sometimes my naivete outweighs my years.

So, when the nastiness began, I was conflicted. I was a journalism major. My dad covered civil rights marches; he was arrested going under a barricade at a nuclear protest. I cut my teeth on the first amendment. I don't like censorship.

But, I will not publish comments that are unkind to others. You can say whatever unpleasant thing you have to say about me. Criticize my taste, loathe my style, correct my spelling (please) and I will publish your comment, but if you make a hateful comment about someone else, I will reject it. For the most part, the products and work posted here are of my choosing (which is part of the fun for control-freak me) but it does not seem fair to provide a forum to bash someone or something who showed up here arbitrarily.

I've given this some thought. I've considered not accepting anonymous comments, but the first comment I made was anonymous (can you guess which one?), and I participated in the community for a while that way. So, bring it on. I can take it, but lay a finger on one of my designers and I'll take you out. Just to be clear.