So, fun and sun with our big city friend in Vegas.  It was a birthday gathering of sorts, but that was really a thinly veiled excuse to get together.  Magnetic and engaging, he attracts, well, he attracts nearly everyone, but his crowd is largely smart and funny.  Some folks go back as far as grade school while others are more recent additions to his circle of friends.  It was an eclectic group.  Natives of New Jersey, L.A., Brazil, Tulsa and Kansas City, current residents of New York, L.A. and K.C.  Occupations ranged far and wide as well; law, real estate, IT, oil & gas consulting, acting, managing, writing, architecture (who was also a former model.)  It made for quite a stew and we should all be so grateful that our chef has such a knack for mixing people.  Needless to say, there were a lot of big personalities at the table.  Quick and lively, it's a tough crowd for introverts. 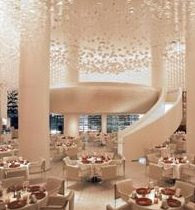 We dined at the Mix at the Hotel at Mandalay Bay Saturday night which provided stunning view inside and out.  Our dinner placement was beautifully orchestrated and I had an old friend on one side and what I hope to be a new friend on the other.  This is the aforementioned Brazilian architect who took a few years off to model.  Obviously easy on the eyes and ears, his story was engaging.  He's been back in architecture for a while now and is going out on his own.  Gracious and lovely, he asked me what I did and when I filled him in with a sentence or two he beamed and said, "See, we have so much in common!"  Yes, me, the Midwestern housewife blogger and he, the international, jet-setting, former-model architect.  But he was right, we did, and I hope to get some images of his projects to share.

Mr. Blandings and I are not gamblers.  We mostly sat by the pool and talked.  And ate.  If you've never been to Vegas and think you won't like it, I have to tell you, there is a lot to like.  We stayed at the MGM Grand Signature which is attached to the MGM, but the building itself does not have a casino in the lobby and is entirely non-smoking.  It felt much more like being at a resort than being at a casino, which was just right for us.  We did do a bit of shopping as well, though I usually consider shopping a bit of torture, but in even in the most exclusive shops in Vegas everyone is lovely to you.  After all, no matter what you look like, you might have just hit it big.

And what folks look like is part of the fun as well.  The people watching is unbelievable.  You will never feel better about yourself than you do when you walk through a casino, truly anytime day or night as there is so little delineation between the two.  The day we left, coming down the elevator from the 38th floor, two young women in bikinis stepped onto the elevator at about floor 22.  Just bikinis.  Very small bikinis.  They carried on a lively exchange about whether or not to have an "AmEx" and how useful it would be in Madrid.  To be honest, they looked amazing, but even so the other mature woman on the elevator with us exchanged a slow-blink with me.  I turned slightly to exchange disapproving looks with Mr. Blandings and there it was written all over his face.  Jackpot.