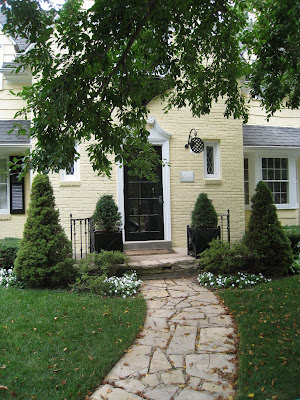 Mr. Blandings treated me to new planters for the front step for my birthday.  It was a married kind of birthday present.  I did want them, but he wanted them first.  In fact, a friend of mine had seen them originally and been on the hunt; her permission had to be procured before the purchase. 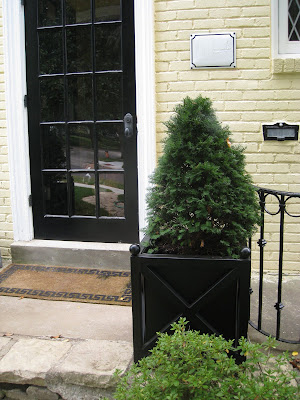 The old ones, a sort of faux something, had a great grey color, but were deteriorating quickly, crumbling on the bottom. 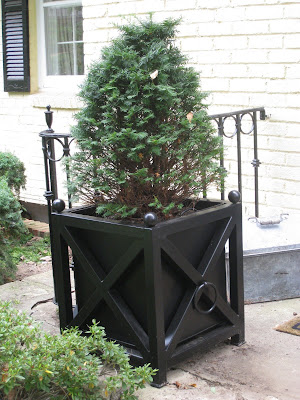 These are metal, both the frame and the liner, and powder coated, so they should hold up for the long haul.  Which is good, because even half-filled with styrofoam peanuts, dirt and yews they weight about 50 bagillion pounds, or so estimated the youngest. 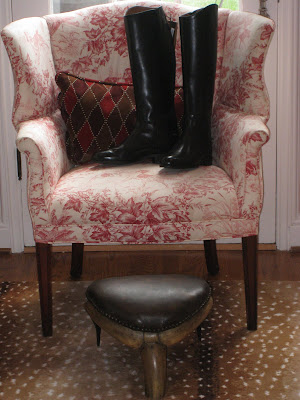 Being a lover of presents, I have no problem buying one for myself.  I emailed Hollister Hovey recently as I had become fixated on riding boots.  Real ones, not, say, J.Crew.  Which is funny, because this is just the kind of thing I would usually abhor.  Safari jackets for explorers, diving watches for divers, riding boots for equestrians.  But Hollister has captivated me with her style and I simply had to have them. 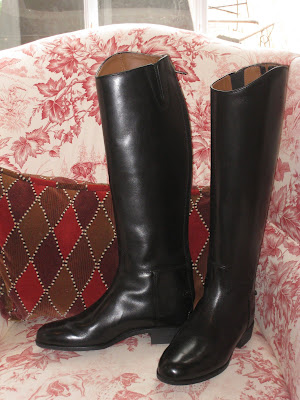 One friend warned that dress boots are not made to walk in necessarily and hinted they might not be so comfortable in dashing about town.  Undeterred, I headed out to CM Tack.  Oh, the wonder of a spot like this, unparalleled by even hardware and art supply stores.  A most delightful woman patiently helped me.  I had to have zippers as I am a bit claustrophobic and the pull on models were giving me the heebie-jeebies.  I also learned that I have "healthy calves" a new euphemism to apply to my aging parts.

I brought them home and wore them around the house.  The initial fit revealed a lot about the evolution and practicality of the goose step.  In addition, I now understand why those WASP-y and elegant riders appear in photographs sanguine with legs outstretched and carelessly crossed at the ankle.  If you think I returned them to their over-sized box you are wrong.  After an hour the leather was already beginning to soften and give and, frankly, they had captured my heart before I'd even pulled them from the box.

Form over function you say?  Perhaps, but I say "Hurry up Fall."