It's been quite a week.  (I've been recently accused of being obsessed with myself, so be forewarned, this is all about me.)  Last Saturday, the youngest Blandings took a tumble at soccer and broke his clavicle.  That graceful sweeping collarbone on the left of your screen is the healthy one; the wretched angle on the right of the screen is the source of a very tough go.  We are both on the mend but are in agreement that skeletons can be scary. 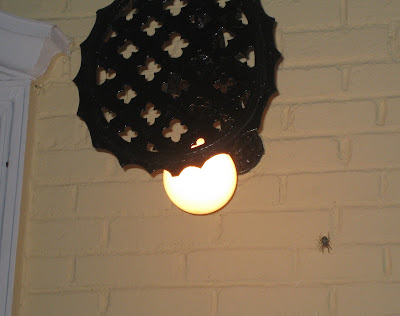 We'd been reading Charlotte's Web and Wilbur offered some solace during the worst of the discomfort.  Almost simultaneously, this monstrous spider appeared by the light by the front step. 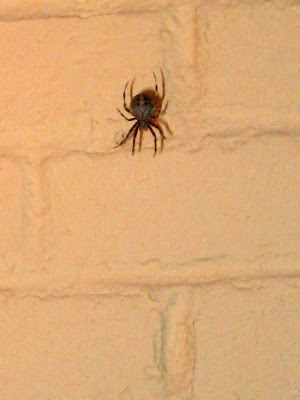 She's really, really big.  And clever.  When you exit the front door she scampers up her web into the black fixture and you can barely see her. 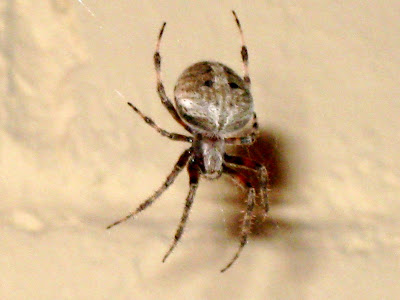 I went around from the back to get a picture for the boys as they have yet to glimpse her up close.  The eldest took the picture to school and came home declaring her an American House Spider.  She is welcome to live on the outside of this American house, but is not invited in regardless of her seasonal appeal. 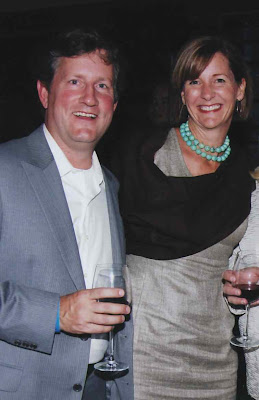 During the convalescence, mail delivery took on a new meaning.  I always feel like the mail carrier is Santa Claus and never understand folks who are not johnny-on-the-spot when he or she arrives.  This week I was so excited to receive the pictures from the Anthony Bourdain event, but once I'd opened the envelope I was horrified.  Above, me and Mr. B.  Lovely, fine.  Enjoying our evening.  Nice. 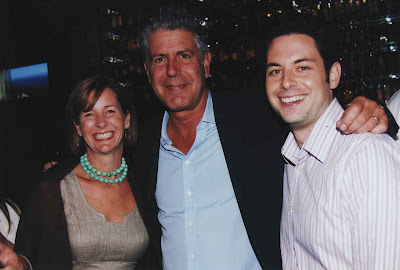 And then, here I am beaming at my brush with celebrity.  Yikes, how awful.  I look like I am preparing for a dental exam.  Fairly bursting with excitement.  I look like I might break something.  Or, as Mr. Blandings said, "wet myself."  Then look at Bourdain.  Pleasant.  Obviously looking over the head of the photographer for the closest waiter.  On the right is Darren Mark, the consummate gentleman, who agreed to be photographed with me as I was too shy to go alone.  Darren is a fellow writer at Spaces and interviewed Bourdain for the last issue.  As we neared my prey I pretended to let him off the hook, "You don't have to go with me if you don't want to."  "Really? Great!"  "No, not really."  Thank heavens he did.  Clearly I needed a chaperone.  Or a mask. 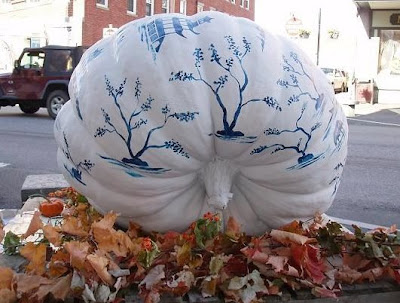 Enough tricks, here's the treat.  You might have seen it already as it was originally spied by Renee Finberg, I believe on a recent trip to Maine.  A chinoiserie pumpkin.  I simply adore this.  If I could do it myself, surely I would save my talents for something more permanent.  Or, if I could do this it wouldn't matter because then I could do it on darn near anything.  But I can't, so I will need to limit myself to jagged triangle eyes and trying to keep myself from eating all the Snickers before Halloween.