I recently received an incredibly engaging email from photographer Miguel Flores-Vianna. He had read the Enduring Style posts from last summer and they had triggered some introspection on rooms that had inspired him, "Here are a few of the people and places that, I believe, have deeply influenced my own personal vision, as well as trends in design around the world. Rather than make it universal and all encompassing, I have confined choices to people I know, have known and/or places where I have spent a great deal of time. So my list does not have any scholarly pretensions but rather comes from the heart." His picks are as follows: 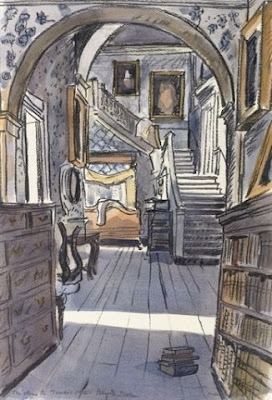 "The first one is an impression, a vague memory of a table all set up with white linens, shiny silver, colorful flowers. The table is in front of a shack on a beach in Patmos, Greece. I am about 20 years old and have no idea to whom the shack belongs; I walked past that memorable feast and went to lay at the end of beach. That table or the memory of it rather always stayed with me. 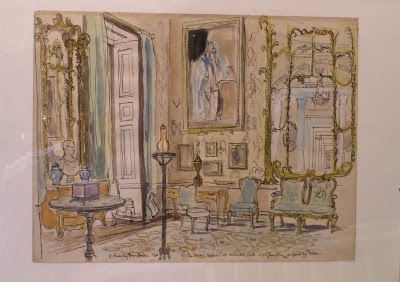 Fast forward another 25 years and I learn that that place belonged to the Englishman Teddy Millingon-Drake. A decorator, painter and friend to half the world in the decorative arts. 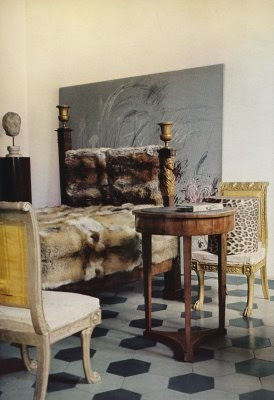 To me the world of interior design would not have been the same without the amazing eye of an American painter who, in the 50's, moved to Italy. Cy Twombly has created some of the most outstanding rooms in the second half of the 20th century. His various residences have a modernity and a timelessness that is moving and captivating. His incredible deft at mixing classicism with modern art still is a bottomless well of inspiration for myself and countless decorators. 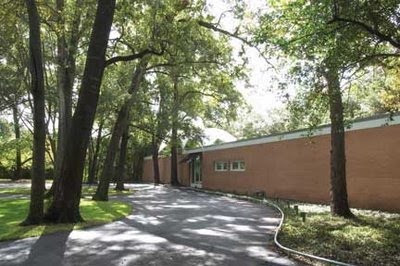 I grew up in Argentina in the 70's. Everybody we knew, family and friends, either lived in modern glass houses or inherited old homes built at the turn of the 20th century with clear European inspirations. It was only later when I moved to New York and began working as an editor that I became aware of the difference between people of modernist or classicist taste. 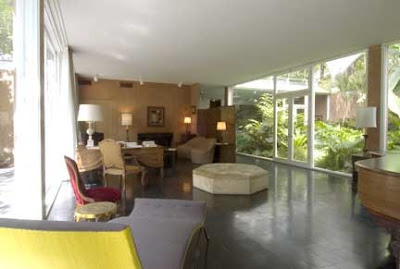 And then one day I went to Houston and I saw the DeMenil House. I realized why, during my childhood and adolescence, I was never aware of old or new taste. See, the de Menils hired Philip Johnson to build them a glass box and later a New York couturier, Charles James, to furnished it. Few of us understand today that a modern house need not be decorated with contemporary furniture. James created atmospheres where the new met the old. Where the clinical met the sensual. Where color met blank spaces. 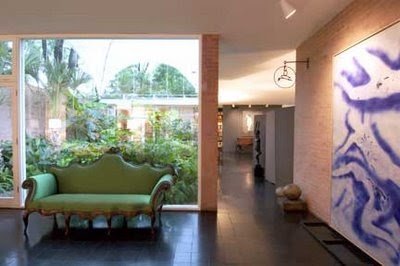 It was a bit what I had experienced as a child, whether we lived in old houses or new houses we always felt the presence of the past through hand me downs or purposefully bought antiques. James invented a language which, unfortunately, has not been necessarily understood by a generation of architects that came after the house was built and decorated. 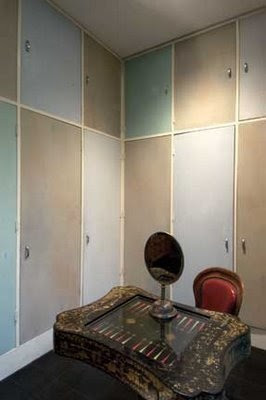 Stephen Sills and James Huniford created a masterpiece in the early 1990's. It is an hour north of New York City. It is dreamy and subtle and so, so grand. It became a bit the ABC of their style, a little Monticello. The low armless sofas, the over sized plaster vases, the Louis XVI chairs, the Rauchensbergs and Fontanas, leaves instead of flowers, stone floors and lacquered walls, pale blues, grays, chartreuse greens. 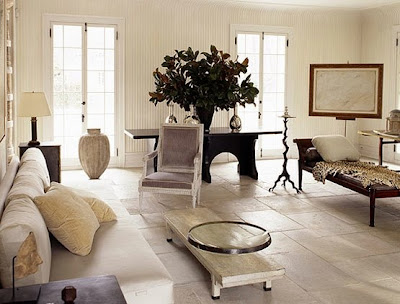 I can't help but be mesmerized at the beauty of it all. It is one of the major triumphs of American design in the last 30 years. 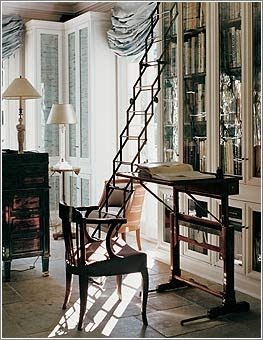 The ivy growing in the wall... Rose Tarlow, need I say more? 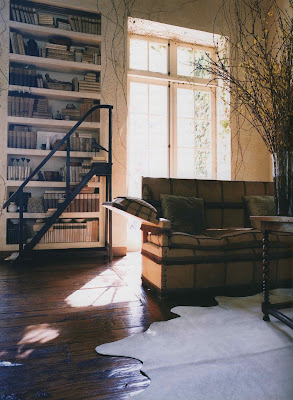 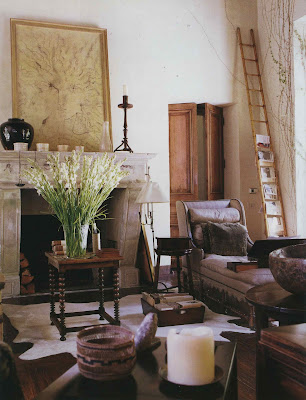 Lars Sjoberg may one day become a national hero in Sweden. He has done more to reclaim and re-discover the 18th Century in his own country than the rest of the Swedish design community put together. 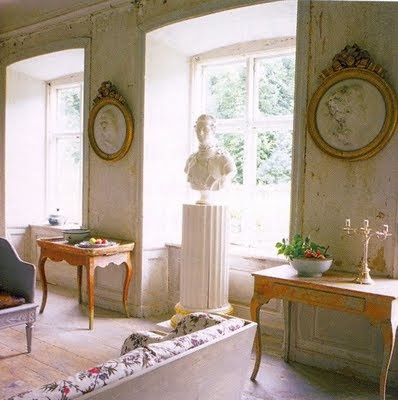 A watershed article in the World of Interiors in the mid 1980's on his property Regnholm became the starting point of a love affair with those white, subtle rooms that we have come to known as "gustavian" (after King Gustav lll). Today Sjoberg owns about ten houses and they have all become his laboratories to study and re-fresh an era (1700's) which has become his passion. 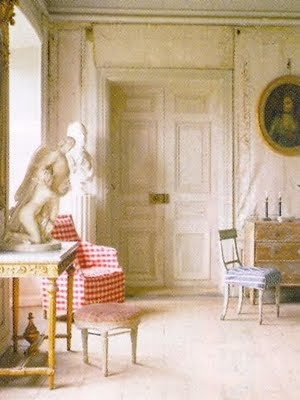 (Andre) Le Notre designed gardens, and gardens are made of rooms. I am including him in this list. The master gardener, the creator of Versailles and Vaux le Vicompte. The grand tamer of nature, logical, measured, musical. 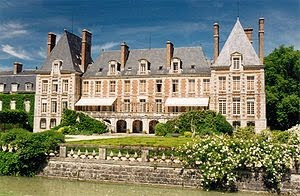 Although I can not help but marvel at his masterpieces, it is a smaller one, and less known that moves me - the gardens of Courances, a chateau to the south east of Paris, still in private hands, but more intimate, private and measured. 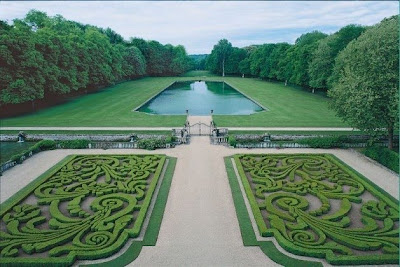 A symphony none the less. Whether under summer rain or in brilliant snow the garden is a masterpiece, timeless and unmeasurable. At times grand and imposing, at times shy and quiet. Always poetic. 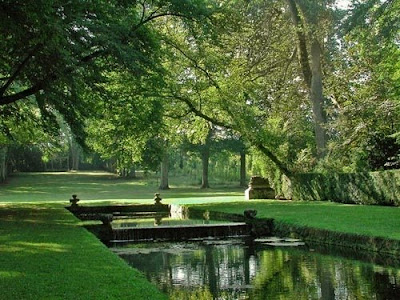 Luis Barragan is the grandest name in Mexican architecture as far as the 20th century goes. And what a decorator. His monastic eye gave him set standards to bear. And yet he created a language where the strict becomes sensual; the holy, decadent; and the colorless, a riot of hues. 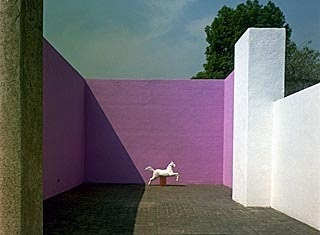 His house in a nondescript Mexico City suburb is a mini temple to his passion for clean lines, luxurious nature, religious art and a passion for horses. At times claustrophobic like a monk's cell and yet as liberating as a grand cathedral. Totally modern and timeless." 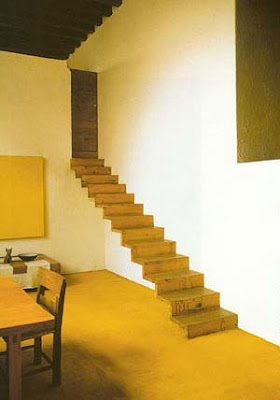 It is an incredibly insightful compilation and I am grateful that Miguel took the time to share it with me.

Images, from top, two works of Teddy Millington-Drake via ArtNet; Cy Twombly's home via Aesthete's Lament; four images of the DeMenil home via House of Beauty and Culture; two images from Dwellings by Stephen Sills and James Huniford; Lars Sjorberg's work via Belgian Pearls; Couranses via The Hip Paris Blog, and Luis Barragan's work via google images, and I am so sorry, but I cannot remember which source.