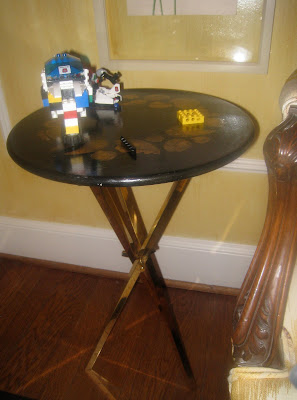 When Megan and I had first reconnected through blogging, I emailed her an image of these Fornasetti tables and said, "Don't you want these for that beach bungalow?" And she emailed back, "Someone would just be playing Polly Pockets on them." To which I replied, "That's why I'm not getting them; at my house it would be Legos." The fact that here they sit (as I said they would not) covered in Legos (as I said they would) shows that I know my children better than I know myself. 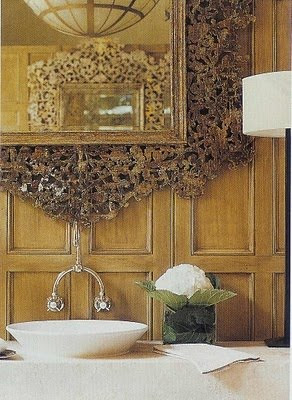 In other news, this Waterworks faucet is discontinued. However, the Chicago showroom was incredibly helpful and sent three other options for my powder room that will likely flounder for another year. (Are you noticing the twin reflected in the mirror above? Why didn't I keep the whole feature? We'll never know.*)

I'm quite sure today will be equally scintillating. Perhaps more so as the boys are insisting we leave the house. Had I not watched the last of the six Thin Man movies that I recorded New Year's Eve I might put up a fight. As it is, we may indeed have to head out. For Piero's sake if for no others'.

* Great thanks to Things That Inspire who let me know that this home, which was featured in Veranda in the July/August issue of 2007, is on the McAlpine Tankersley website here. The photo is by Peter Vitale.

Post Script: Mr. Blandings informed me, while never taking his eyes from the football game, that William Powell grew up in Kansas City (he was born in Pittsburgh.) Apparently the elder Mr. Blandings met him at a golf tournament and declares, "He was a very nice guy." Do you think he saves these things? I mean, we've been married eighteen years and nary a peep about William Powell. Who knew?