The boys and I drove to Dallas for Spring Break. (Is Spring Break capitalized? In our life it is.) We went through Tulsa, where I grew up, which is another story for another day as it is still tumbling around in my head and my heart. 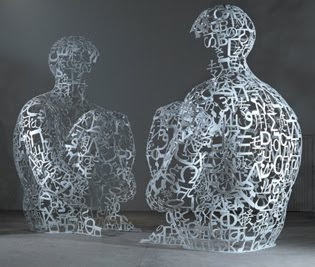 But Dallas was sunny and warm, where Kansas City was cloudy and cold, and it was a lovely break. Often when we are there the house is bursting at the seams with people and events, but this trip was quiet and easy. My father's hair, which has always been thick and wavy, an on-going point of contention with my genetic lottery, is thinning just slightly in the front. He's tall, so you wouldn't notice, but when he bent over to show my youngest son how to shoot a pool ball I could see it. That almost imperceptible change was unreasonably significant. 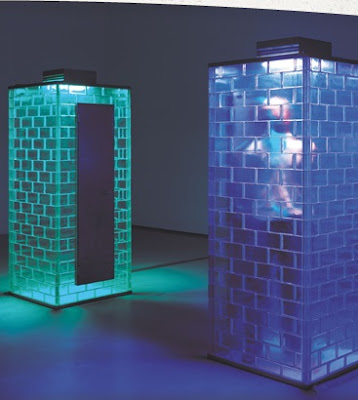 My dad, while happy to go on the two-hour tour of Cowboys Stadium (yes, I did say two hours) decided to pass on the Nasher Sculpture Center. "I've done enough Sunday Morning shoots. You can tell me about it when you get back." 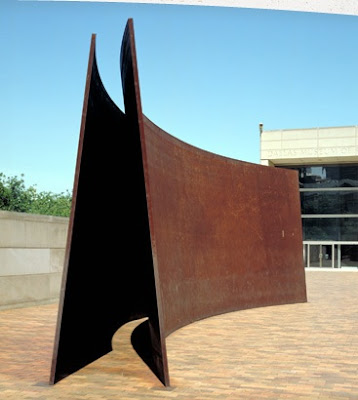 The Nasher collection is extensive and the Calder pieces were not on display, but it was four thumbs up for artist Jaume Plensa, whose pieces are on display right now. Plensa's work is an exploration of culture and nature, but particularly interesting to me as he incorporates text into many of his sculptures. That curtain of letters, top, spans the length of the entry and you must walk through it to access the galleries. It's chimes are delightful. 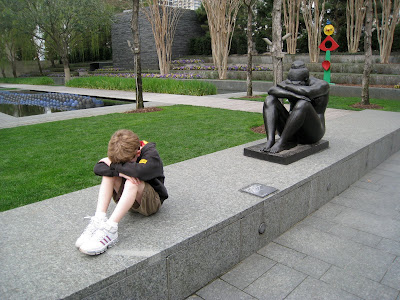 As we were looking at some pieces in the permanent exhibit, the youngest began to get a little squirrelly. A museum guard, a bear of a man, came over and quietly held out his hand and said, "Come with me." Hand up, head down, he walked quietly into the other room. I exchanged a look with his brothers and we followed to find the guard bending down and pointing at Twins I and II (second from top.) "You and your brothers can go inside, if you go one at a time." Pure delight to be inside those sculptures, finding the letters of their names and Pi and Omega and "a table" depending on your perspective.

Song of Songs III and IV (third photo) can also be experienced from the inside. As could the Richard Serra sculpture (photo 4) though I did not go in, I could hear their laughter as they raced through. There was a secret room (Tending (Blue) by James Turrell), accessed through doors set into a berm. The boys came upon the doors and swung them open without a thought, traveling the tunnel that lead to a small space open only to the sky.

I marveled that they did not hesitate to go through that door or down that tunnel. I know if I asked them what their favorite part of the trip was they would say, "The screen at Cowboy stadium," or "the Aquarium," but I would vote for the forty-five minutes we spent here. I think either Charles, Kuralt or Osgood, would agree with me.
All images except the last via the Nasher Sculpture Center.