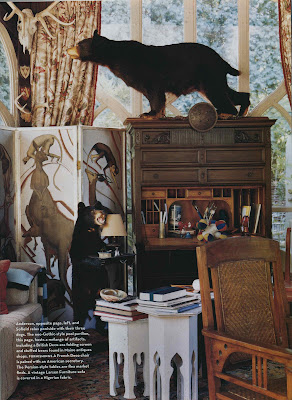 On only one other occasion did I trip up the whole class.  Even Aesthete, who knows nearly everything (nearly everything that holds my interest) was momentarily stumped.  In any event, this entire exercise was backwards.  All I wanted to post all along was Bill Sofield and Dennis Anderson's Southampton home from House and Garden, September, 2005. 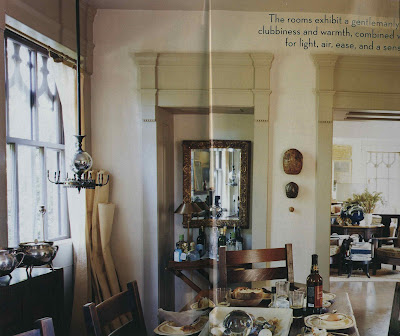 If you look closely you can see the telltale tusk table just through the doorway between the chairs.

The images from the earlier post were Sofield's home while he was still associated with Thomas O'Brien and Aero Studios; it seems several readers could feel the influence of that partnership.  His apartment appeared in House and Garden, March, 1993. 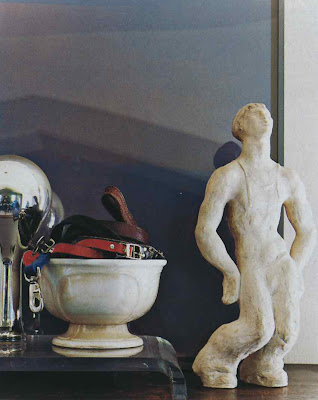 This sailor sculpture by Louis Slobodkin was on the mantle in the previous post as was the silver bulb which appeared on the coffee table.  And, yes, I adore the bowl for leashes.

The Southampton home pictured here is something of a castle with a long and spirited history. I'm captivated by the house and its organic, personal decor.  But I am especially in love with the way the dogs are showcased in residence. 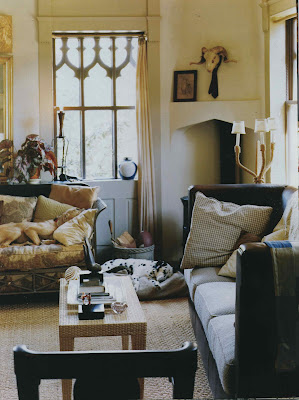 They are either beautifully trained or completely indifferent to the photographer and all the rest tromping through their home.  Don't miss the sleek and noble beast completely sacked on the sofa.  Heaven. 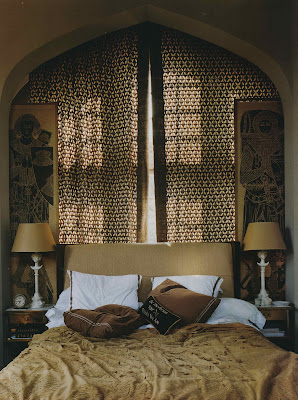 My only regret in shifting my office is that Rosie, my boxer pup, used to sleep on the sofa in a sunny spot while I worked.  Now I sit in the sunny spot and she is protesting by sleeping in the kitchen. 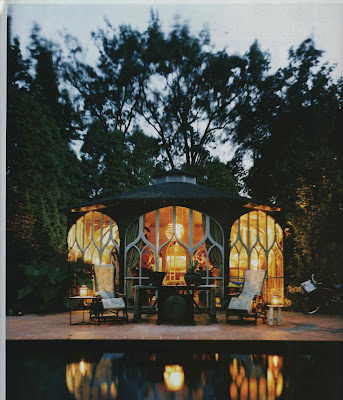 I'm luring her back in by moving her bed right by my desk.  It's a tough transition.  The door, now conveniently behind me, would be so easy for the in and out of chasing squirrels but as she has never seen the door opened before it is somewhat terrifying and she backs away slowly, tail tucked, when I try to coax her through it. 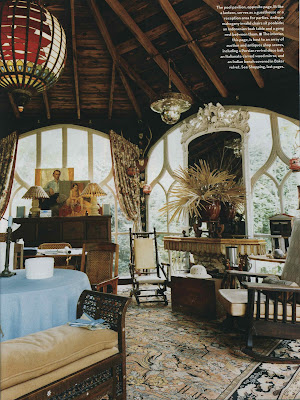 Sakes, I got distracted.  The poolside gazebo, shown in the two images above and top, is graced by a Tiffany chandelier designed for Gorman's Chinese Theatre.  Sofiled and Anderson say in the article that they enjoy the taxidermy as it satisfies a love of antiques and nature simultaneously.  The bears are a nod to local lore that a former owner, a jewelry heiress, once kept pet baby bears there.  I wonder if they slept on the sofa, too.